For the holidays, my partner and I decided to go on a vacation to Arizona. It wasn’t meant to be a spiritual journey, but spiritual growth happens when you least plan it.

Many insights on manifesting happened in those 10 days. The main one was when we ran out of gas on a long desert highway with no cell service…

The first thing was to remain calm in the midst of upcoming uncertain circumstances. And I was quite impressed with how we were both handling the situation.

Next was to have faith… I figured since Jesus was able to multiply the bread, maybe I could multiply the fuel (I’m only half-joking here). 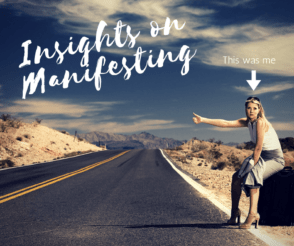 I know I have strong intentional powers in the kind of work I do, but this was a completely different arena. So I kept holding to this intention and remaining calm as I kept glancing at the fuel meter dropping quickly.

When there was no more bars left on the fuel meter and over 20 miles to go, my partner decided to pull over to a safe spot. There hadn’t been many of them along the road, so he thought it would be better safe than sorry.

At that moment I became slightly overcome with discouragement. The car probably wouldn’t start again and I didn’t know how long we would be stuck there.

I didn’t want to waste hours on the side of the road. And have to rely on a good Samaritan to pull over, who just happens to carry extra fuel (what would be the chance). This only triggered how I don’t like asking for help and having to rely on others (these situations are great at uncovering our subconscious beliefs).

For the first time in my life, I went to the edge of the road and put my thumb up.  Then… not more than one minute later, a wonderful synchronicity occurred. A truck came out of a hidden dirt road on the other side of the narrow highway. The guy happened to have fuel at his hunting camp where he just came from and was happy to go back and get it. In the end, he didn’t even accept our money.

Within 5 minutes, we were back on the road! So, the gas was multiplied easily and effortlessly. Just not in the way I was trying to do it.

This lesson for me was about letting the ‘how’ to Divine intervention and grace. And to stop being stubborn about how I want things to happen!

Although, it’s ok to have preferences with our intentions. I wanted this ordeal to be over fast, easily and painlessly. I was clear about that. And this is exactly what happened.

I know that it may have been just a ‘fluke’. Many other probabilities could have unfolded, which could have had us back on road eventually. However, this exact situation aligned itself in the most perfect way.

I didn’t manifest fuel out of thin air, no… It’s not about performing miracles. It’s about creating the life you want within the reality and all the probabilities that already exist. To believe that you do have more control over your life than you may realize. Even if the only thing you can control is your actions and reactions. And to allow yourself to see what is hidden.

I try to go by the assumption that anything is possible and try to keep an open mind. I say ‘try’ because it does take some practice. The mind and tongue are sneaky if you don’t pay attention.

By that I mean, if one person has been able to do something, for me that means it is possible. And when I have no idea if it’s been done or not, I assume that it has.

For me, the chance that one person in the world has been able to do what I am trying to experience or achieve is probably 99%.

Conscious mind-tricking can be important because most of our life is run by unconscious beliefs. It helps to tip the balance toward seeing and manifesting the most positive probabilities and situations.

This situation was stressful and could have been disastrous. At the same time, it was exhilarating to have it turned around in the way it did.

I love experimenting with the laws of manifestation because it’s fun. It’s fun even when you just get to save a few bucks or discover something completely new.

Remain calm. Always look for the silver lining. State very clearly all that you need. Listen to all tidbits of guidance coming up. Be open to all sorts of possibilities. Sometimes co-creation is easier than trying to go at it alone. Tip the balance as much as you can with conscious actions. See it as a game to be played and have fun with it.